cbanks
Not applicable
Fall is my favorite time of the year, and not just for obvious reasons (football, football, football). I played for the New York Giants and won two Super Bowls with them, and you can still hear me talk football on Sirius NFL Radio and WFAN.  This autumn is a bit different, though, because I have a few extra tricks up my sleeve and many exciting projects going on. I knew Southwest would make a great partner with what's perhaps the biggest project of all.
In conjunction with New York's Fashion Week, I am launching an HSN-exclusive collection for women on September 5th.  The collection, "G-III 4Her," is designed for women. When I founded "G-III Sports by Carl Banks" in 1988, I focused primarily on men's clothing. In the past few years, with every collection I launched came a flood of calls and e-mails from women asking, "where's the women's clothing?" Women were buying men's clothing in the smallest sizes! I wanted to make everyone happy, so I created a fashionable and comfortable line for "the real women of America"--women who love football, and want to look good during football season, whether tailgating, hosting a party, or just hanging on the couch. "G-III 4Her" was created to give the female fan some sports apparel made with her in mind, and with a fashion twist.
As we all know, social media is a game-changer, and we wanted to do a really exciting giveaway to complement my launch.  My team and I came up with the idea to give away tickets to a New York Giants game: that one was easy. But we wanted to reach beyond New York, knowing fans come from all around the United States. The Southwest Airlines connection hit us like a ton of bricks: superstars of social media, and new to Newark.
I have always been a personal fan of Southwest.  Their foray into the social media frontier is to be admired, and the Newark angle made perfect sense.  We spoke with Southwest, they jumped onboard, and the rest is history! 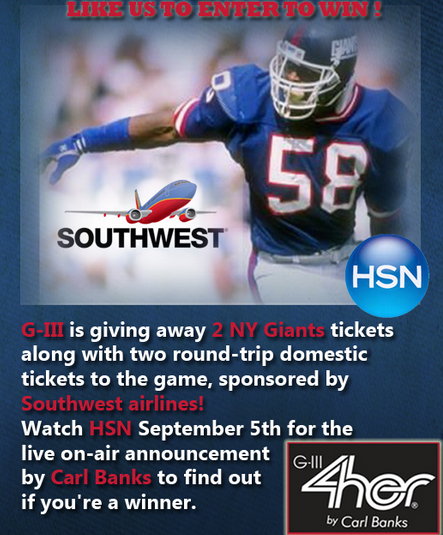 So now's your chance, folks.  Two tickets to the Giants game and two roundtrip tickets on Southwest to help you get there.  All you have to do is "Like" my page on Facebook and follow me @CarlBanksGIII on Twitter!  The winner wil be announced live on air on HSN on September 5th at 1 a.m. Tune in, join us there, and of course: good luck!
Thanks, Southwest, for the opportunity to blog and share in this experience, and here's to a great NFL season!
524 Loves