Behind the May Issue of Spirit

There's an old expression, "If everything goes right, it's not an adventure." It's an expression you won't hear Southwest people say. Their job is to make as much go right as possible.

So when I heard that the TLC Network was debuting a reality show on May 24, I was skeptical. I mean, think about it. How much drama can there be in flights getting in on time, baggage arriving where it's supposed to be, and cheerful Employees boarding planes smoothly?

So our executive editor, John McAlley, flew to Chicago to see how the film crew worked its magic. A blizzard blew in while John was there. Perfect! But the problem was...very few problems. Not a lot went wrong. So John made a second trip to flesh out his reporting. And we ran the story in the form of a multi-page cartoon. We did our own drama through the art, with the film crew dashing through the airport like superheroes after they've gotten a tip about a dog loose on a flight from Detroit. Reality at its best. 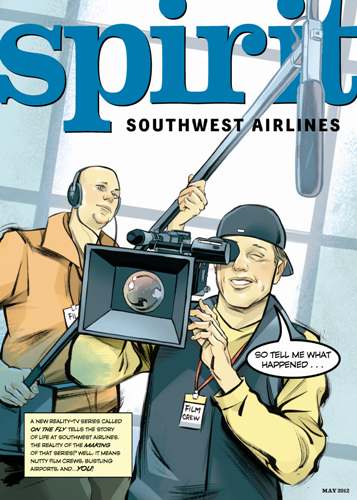 This issue includes another form of reality entertainment: TED talks. Have you gone online to see these great short presentations? They cover the gamut from science and technology to social trends. Writer David Hochman went to the big annual TED event in California and wrote an unabashed love story.

We also have a great piece on Habitat for Humanity and how it helped our writer with some personal skills. And Travel Editor Amanda Gleason goes on a series of adventures in Detroit.

Now for the Numbers: Children smile about 400 times a day. Every American eats 20 pounds of onions a year. More than eight of ten HR managers judge you by the state of your desk. Good thing none of them have seen mine.

Somebody help me in my homework

What is a cancelled flight?